EXPLORING THE ROLE OF HOMOEOPATHY IN THE MANAGEMENT OF MALNUTRITION IN CHILDREN IN THE AGE GROUP OF 1 TO 4 YEARS: A PILOT STUDY

Malnutrition, which is all-pervasive in India, is assumed to be solely caused by food insecurity. Yet, government schemes targeted at providing children with nutritious food supplements have not brought about significant improvements.

This study was conducted in and around Palghar and Vikramgarh to determine if community-based health care intervention with Homoeopathy as a therapeutic mode can be effective in mitigating malnutrition. A total of 22 children from grade I, 49 from grade II, and 13 from grade III identified through a survey of aanganwadi children were taken up for study.

A team of physicians, along with community health workers, made Homoeopathic case definitions of these children, treated them with the similimum, and handled follow-ups. Another part of the intervention was educating the mothers and aanganwadi workers to improve their feeding habits.

Goda SC, Ambekar NB, Tamboli PP, Broker DR. Exploring the role of Homoeopathy in the management of malnutrition in children in the age group of 1 to 4 years: A pilot study. Journal of Integrated Standardized Homoeopathy (JISH) 2018;01(01):12-20.

The MLD Trust has been working in mother and child care in the Vikramgarh taluka of Palghar district since 2009. Many infants and children suffering from malnutrition have also been identified. Today’s malnourished child means tomorrow’s malnourished adult, leading to a future generation suffering from malnutrition. Can this cycle be broken through lifestyle changes (like food habits) and Homoeopathic therapeutics, for a sustainable change? A Pilot Project was conducted from September 2015 to August 2016 in the aanganwadis in the area of Kurunze PHC of the Vikramgarh Taluka, Palghar district of Maharashtra, for exploring the scope of Homoeopathy in malnutrition. This paper reports on the project and its findings.

Malnutrition is a state in which a deficiency (Undernutrition), excess, or imbalance of nutrients causes measurable adverse effects on tissues/body form (body shape, size, and composition) and function, leading to a clinical outcome.1

Malnutrition is classified as mild, moderate, and severe acute malnutrition; it is determined through the height, weight, and mid-upper arm circumference (MuAC)2. The Indian Academy of Paediatricians has calculated the weight percentile taking into consideration the genetic make-up of Indians, their nutritional status over generations, and growth norms understood from surveys. They have provided guidelines to grade malnutrition as follows: Grade I- 70-80%, Grade II- 60-70%, Grade III- 50-60%, and Grade IV-– 40-50%.3

Undernutrition being more prevalent in the rural tribal areas, this paper will imply undernutrition when we say malnutrition. According to the NHFS survey 2015-16, every second child in rural Maharashtra suffers from growth-restricting malnutrition, mainly due to chronic hunger4. A TISS survey carried out in 2016 in the Vikramgarh taluka found that 57%, 21% and 53% children were stunted, wasted, and underweight, respectively. All these are categories formulated on the basis of weight.5 A leading newspaper reported 718 child deaths in Palghar in 2015, 600 in 2016, 470 in 2017, and 119 till July 2018.7

Malnutrition is a hydra-headed problem with multiple causes. Food insecurity, maternal undernutrition, faulty digestion and assimilation of food, recurrent infections, worm infestations and poor hygiene are some of the causative factors. It is influenced by bio-psycho-social factors and affects various aspects of child development, especially retarding physical and intellectual growth.8 However, the various interventions by government agencies have always been food-based. Regular surveys conducted by the NFHS show that compared to 2005-06, the percentage of wasting and underweight children has in fact increased, although the stunting has reduced from 46.3 to 38.4%. 9. It is clear from these findings that supplying nutrients alone may not be the solution.

It is tempting to postulate the role of impaired susceptibility in influencing the onset, progress and outcome of malnutrition in individual children. After all, not every tribal child is affected! Moreover, some children, despite being exposed to optimal nutrients, never thrive. Our philosophy tells us that in these circumstances, one must suspect the role of underlying Miasmatic forces and hence direct our therapeutic interventions accordingly.

In 2010, MLDT Pune ran a project on studying the effect of Homoeopathic medicine in malnutrition along with the government-run Integrated Child Development Scheme (ICDS) that takes care of nutrition through supplementary food. This yielded a better result compared to the supplementary food distribution programme. Homoeopathic remedies seemed to modify the susceptibility to bring about improvement in digestion and assimilation of food, reduce the infections and worm infestations, and thus improve the child’s state of nutrition.

This hypothesis needed further exploration on a larger group of children. The current study was therefore taken up keeping the following objectives in mind.

Subject recruitment plan: A total of 18 aanganwadis from 25 villages were randomly selected. The children fulfilling the selection criteria were selected for the study. Their parents were oriented and those who gave consent were enrolled for the study.

Migration of families and parents being busy in farming activity were the main reasons for children dropping out from the project.

Table 2: Classification according to Gender and grade of malnutrition 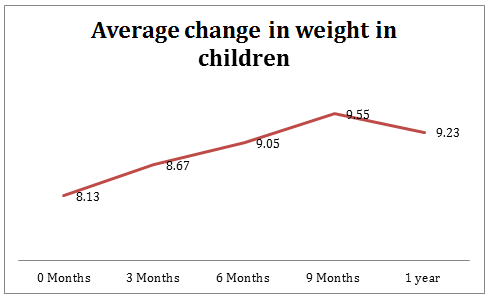 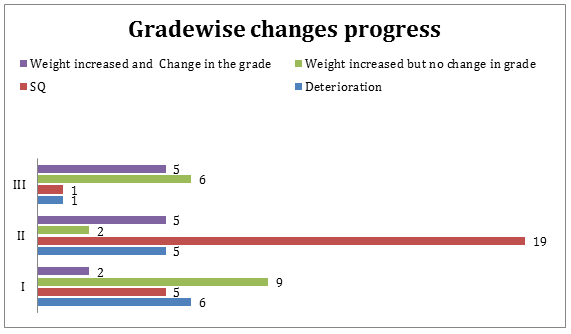 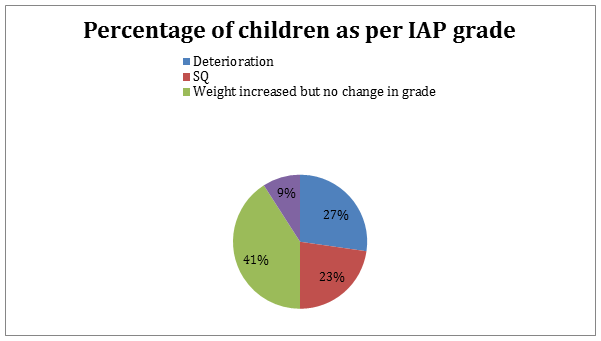 A total of 27% children have deteriorated; 73% have not lost weight despite increase in the age and height.

Table 5: Grade wise change in the frequency of infections:

* Reduced: Only those children were considered where frequency has reduced to more than 50% than the previous year

#SQ: Frequency reduced, but not more than 50% that of the previous year. 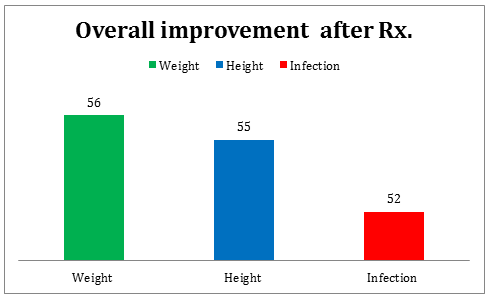 Improvement in anthropometric measurements in both the genders

Approximately 100 grams of weight gain per month was seen in both genders. The gender distribution showed that the prevalence of malnutrition is more in the girls than the boys, by 6%. This could be due to gender discrimination in the community. In this community, the girl child tends to get a little less food, less attention / care, has to care for younger siblings and do physical work from a young age. During the study, we ensured that girls got proper food care; subsequently, the results showed that the girls improved by 20% compared to the boys. It may be concluded that the basic susceptibility of females is better and perhaps the additional attention and care helped them progress better. Improvement in height and rate of infection was seen to be uniform in both groups. This indicates that the growth spurt may be taking place equally in both genders. Weight fluctuates as per the frequency and intensity of the infection; although the height is increasing, it takes a long time to show significant change. Genetic factors may also influence the height.

Improvement in the Susceptibility as per the grades of Malnutrition:

The higher the grade of malnutrition, the more severe is the problem. However, the susceptibility is assessed not only according to disease severity, but also individual expressions. The results indicated an improvement in all the grades, with slightly more improvement in grade III. On further study, it was found that the cases with individualising expressions showed more improvement irrespective of the grade. A larger sample is required to verify this aspect.

Steady improvement in weight and height:

As per Homoeopathic principles, once the improvement starts it should continue, provided there are no maintaining factors. Table 3 and Graph 1 indicates a reduction in all the grades between 9 to 12 months. This was the period when many children developed infections due to environmental changes. This caused an immediate drop in the weight. Again, this indicates the importance of preventing recurrent infections in the management of malnutrition.

Improvement in the recurrent infections rate:

Improvement in acute infections, a contributory factor to malnutrition, was seen in 52.38% of cases, indicating that susceptibility can be modified with the similimum. Thus, by lessening the load of acute infections, the vicious cycle of malnutrition ó infections was discontinued. This should result in weight gain. For e.g. Aloes was prescribed in a child with recurrent diarrhoea in the mornings. It helped to reduce these episodes and the child started to gain weight.

From the Table of remedy distribution (Table 6), it is evident that more than 80% of children were given remedies from the mineral group as chronic, deep acting, constitutional remedies. In a previous study we conducted on scabies under an extramural project, 7 similar remedies had helped. It again confirms that there are a few fixed community characteristics that point towards a group of remedies. These remedies may help a majority of illnesses in a particular community.10

A detailed study of symptomatology reveals that the characteristic symptoms are at the level of constitution rather than malnutrition or even deficiency disorders. Our long experience of this community indicates that Fearfulness and Timidity are community characteristics. That is why the Calcarea group remedies and Silica are indicated in a large number of patients (56.47%). However, we do get individual characteristics in some cases, indicating other remedies. In a few cases, we got characteristics in a particular sector, e.g. respiratory symptoms in cases of Merc sol or as indicated above, recurrent diarrhoea in a case of Aloes. This suggests that the susceptibility throws characteristics at two levels that can help in remedy selection.

All the children continued the diet at aanganwadis. Despite orienting the parents for cooking a nutritious diet, the parents did not make any change. The reasons could be:

Learning from the Pilot Project

Properly selected Homoeopathic medicines definitely have a role in the management of malnutrition. Since there are less characteristics expressed in the disease expressions, the remedy is selected mainly through a study of the behavioural pattern and concomitant expressions. Studying these in this community will help in accurate selection of the remedy. The community needs a proper orientation about malnutrition and its consequences. Various simple food recipes should be shared with them so that they will participate better in discontinuing the malnutrition cycle.

The pilot study was done on a relatively small sample size as compared to the magnitude of the problem. The design did not have comparative groups. Hence, the study was mainly done to generate the proper hypothesis and understand the logistical issues in implementing the individualised model of Homoeopathic care for a public health issue.

A robust comparative model for studying the effect of Homoeopathy should be undertaken. There is also a need for orienting community about diet and effects of malnutrition so that their participation in this process will increase.

The authors sincerely thank the MLDT Community Extension Programme for funding the project.

We extend our gratitude towards Dr Rupal Dalal, Consultant Paediatrician, who guided us about the

fundamentals of nutrition and the relevant issues of malnutrition in the community.

We also thank the team of CHWs and MPWs for the rigorous field work that they put in for the project.