AN AGGRESSIVE, AMOROUS MAN WITH ALLERGIC RHINITIS AND VARICOSE VEINS

This case report describes a 32-year-old man who presented with allergic rhinitis, varicose veins, and stasis dermatitis. The patient had a history of deep vein thrombosis with pulmonary embolism. The main pathological generals in the case were identified as veins as the main chief tissue affinity with varicosity and thrombosis with metastasis. Boger’s approach helped to solve the case and the qualitative study of the mind helped in finer differentiation with the help of psychodynamic understanding. Lachesis was the final remedy chosen. The case brought out the importance of Boger’s approach in Homoeopathic practice and also the role of Homoeopathy in a case with structural pathology and its efficacy in halting and to some extent reversing the pathological process.

PATIENT AS A PERSON:

A 32-year-old male patient from Bihar, born and brought up in Mumbai, came to the OPD for case definition at the appointed time. His father was quite strict and hence his relations with father were not good. The patient and his brother had to follow whatever the father said. This caused much vexation to the patient. The mother is good-natured, but she followed whatever the father said. Hence, his relationship with his parents was not good since he was a boy. The patient studied up to the 6th Std. after which he had to go to a far-away school with higher travel expenses. The father did not have enough money to educate both children, so he asked the patient to work and sent the brother for further studies. The patient felt sad, angry, and rejected, even though he had not been interested in studies. He thought “why only brother, why not me?”. After this, he started detaching emotionally from his parents and brother. He started going for manual work from the age of 12. While expressing this, he said “I did almost all difficult works in childhood”. Initially, he used to give his earnings to his father, but stopped later on as he thought, “Father is not taking care of me, then why should I give money to him?”

From the age of 12, he befriended several older people and started drinking alcohol and smoking daily. Once, he got so angry on being scolded by his father that he went to Kerala for 3 days with 2 friends. He started going away in difficult situations, especially when the father was angry and he could not retaliate. He shares everything with friends or weeps when alone. Patient said that he feels better by drinking alcohol if alone or sharing his troubles with friends.

He had relationships with many girls and many were ready to marry him. However, when they approached him for marriage, he refused as he did not have the courage to tell his father. Again, the father arranged his marriage without informing him beforehand. He was angry but could not do anything. He saw his wife for the first time when they got married. He had numerous expectations from a wife e.g., she should work with patient or somewhere else, take care of family and financial responsibility, and should be supportive. However, his wife does not work and makes demands that he has to fulfil. Due to this, they often fight. He gets angry with wife’s demands and scolds her “You don’t like me that’s why you are getting angry at me, if you go to your parents’ home, I will be happy”. Then she cries and they reconcile after some time. The patient feels guilty and thinks he should not say such things to his wife, but he never expresses his guilt.

He said that he doesn’t like his wife because her nature is like his father’s. Due to her demands, he feels happy when she is at her mother’s home. He also feels that she does not spend time with him and doesn’t care for him. When the primary physician asked him what he likes about her, he replied that she is an excellent cook who prepares a variety of dishes. He does not like it if her cooking becomes monotonous.

Father, mother, and brother (married) stay together in a house near the patient’s house, but he never visits. He does not have a good relationship with his brother. Even if he visits, he does not talk to the father because the father is upset that the patient is not giving him money. The patient does not care about that. He is very close to his daughters.

The patient is very ambitious and works very hard for success. He is satisfied with the current job. Initially, he worked as a normal labourer and later got promoted due to his ability and experience. There is a lot of work and pressure in the job.

After marriage, the patient has many girlfriends. He is particularly close to one, who is his colleague since 3 years. She is married; her husband is the patient’s friend. He takes her advice as he feels she plays the roles of father, mother, and friend. He reduced alcohol and smoking because of her. Patient spends a lot of time with friends and feels better. He said that friends are very important in his life and they are like family members. They stand with him in all situations.

Right leg -There is extensive deep vein thrombosis involving the right popliteal and tibial veins causing almost 80% lumen obliteration. There is a poor resting flow in this segment.

Rest of the venous channels showing normal phasicity. There is good compressibility. There is poor augmentation seen at the right saphenofemoral junction and popliteal veins on calf compression and ankle dorsiflexion.

An incompetent perforator is noted about 2 cm proximal to the right medial malleolus with mild reflux.

An incompetent perforator is noted about 2 cm proximal to the right medial malleolus with mild reflux. Secondary varicose veins are seen along the medial aspect of the right leg.

PSYCHODYNAMICS OF THE CASE:

Since early childhood, the father’s strict and dominating nature affected the patient. He did not like father’s domination and restrictions, which led to lot of anger towards father. Father’s decision to allow brother to study and his marriage upset the patient a lot. However, in all instances, he could never speak up against the father and suppressed his anger. He felt wronged by the father, due to which he started detaching from family. He developed hatred towards them and even now cannot connect with them. There was somatization in the form of allergic rhinitis that developed at the age of 12 years after he was asked by father to leave his studies.

The perceived neglect from father also led the patient to indulge in smoking and alcohol, suggesting oral fixation. Alcohol helped the patient to feel much better generally as well as in his complaints and helped to relieve the stresses. At the same time, he also indulged in relationships with many girls suggesting a strong id drive and amorous nature. With his wife, however, he is more interested in her cooking where he is interested to eat different variety of foods.

Thus, in this case, we see a patient who perceives discrimination by father, feels he has been wronged, develops hatred towards family, suppresses emotions and indulges in id drives, with oral fixation, with somatization in the form of allergic rhinitis various venous pathologies, and feels greatly relieved by alcohol. 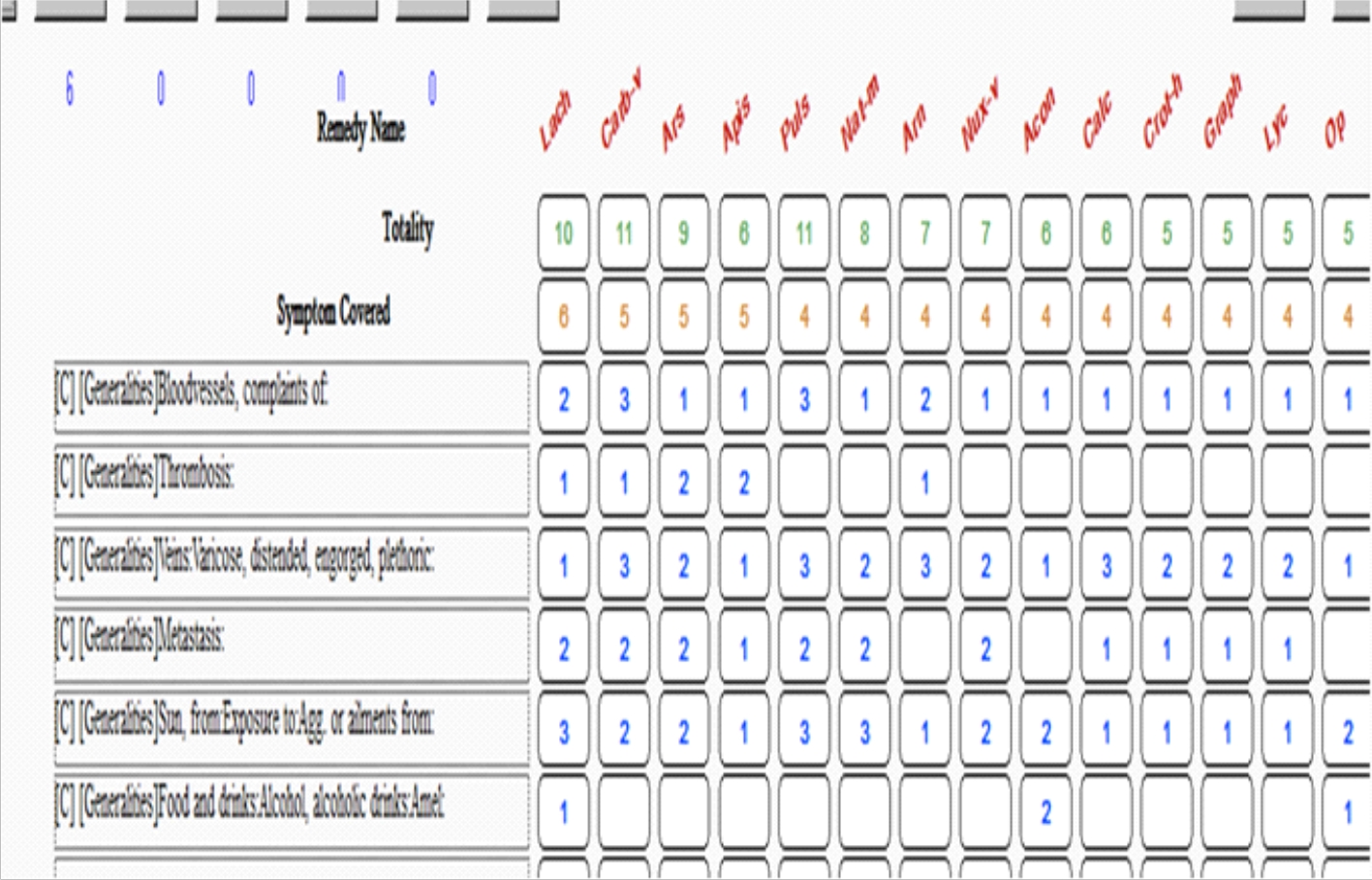 The remedies coming close after Repertorization are Lachesis, Carbo veg, and Lycopodium. Both Lachesis and Carbo veg come close at the level of the tissue affinity and the pathology of vein, varicosity, and thrombosis. However, at the mental level, Carbo veg patients are slow, indolent, and sluggish; in contrast, our patient is aggressive and driven by his basic desires. Additionally, the pathology in Carbo veg is usually suitable to atonic conditions where there is a lack of reaction.

Lycopodium is more intellectually keen and goal-oriented with logical thinking. Our patient is driven by emotions of hatred towards people who have offended him and driven by the id. Lycopodium does not cover the pathology as well. Natrum comes close with the hatred towards people who have offended and sun aggravation, however the quality and depth of relationships as seen in Natrum is lacking. With this understanding of pathology and a person driven by id with aggression and amorousness, points coupled with sun aggravation and desire and amelioration by alcohol, points to Lachesis as the final prescription.

Remedy Correspondence: High (At the level of mind and body) 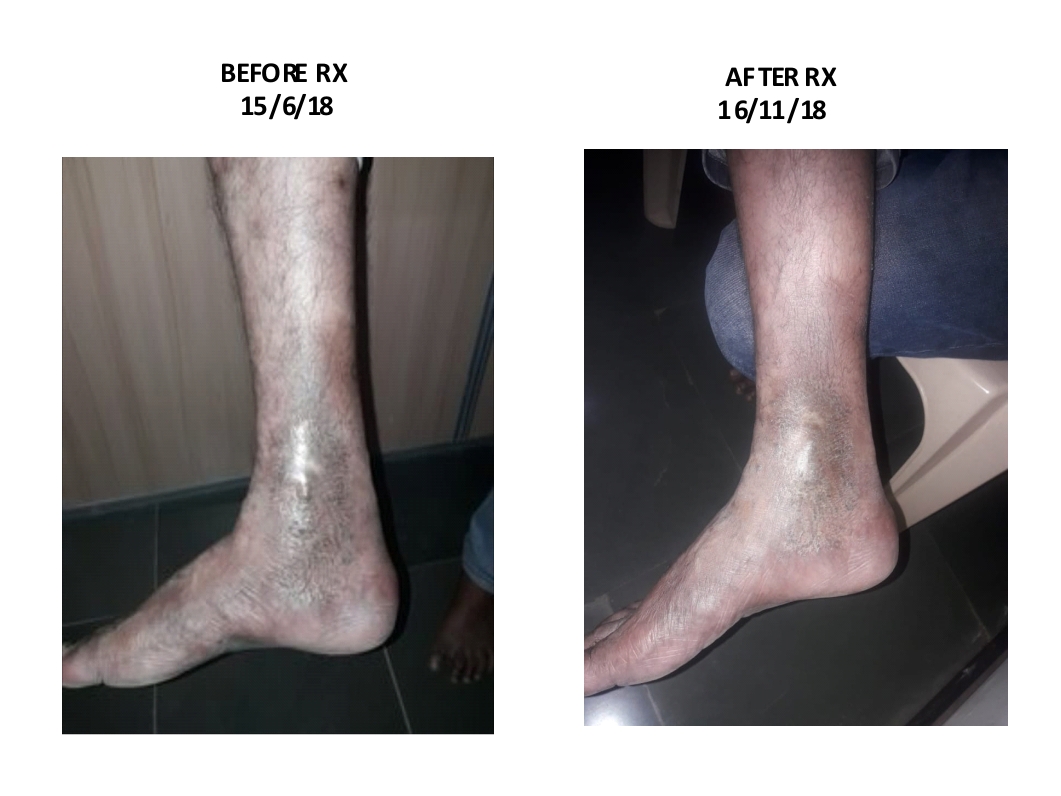 This case demonstrates the importance of understanding the Clinico-pathological correlations in selecting Boger’s approach as well as using the mind for differentiation. It also shows the efficacy of the correct Homoeopathic medicines in halting and to some extent reversing the pathological process. The case also shows the indication and efficacy of the 50 millisimal potency.