AN ANGRY, IMPATIENT LADY WITH ASTHMA: A CASE REPORT

The patient is a 37-year-old woman who presented with the chief complaint of bronchial asthma since the last 17 years. The patient initially received Kali Ars based on the immediate impression of the patient obtained during case taking. The medicine did not relieve the patient, leading to a review. The key to unlocking the case lay in meticulous analysis and evaluation of the plethora of symptoms, which involved using Boenninghausen’s approach. Nux Vomica was prescribed, giving significant relief. The case helps to understand the evolution of the sensitivity and reactivity of a Nux Vomica woman at the level of the mind and body. The case also demonstrates the process of differentiation between Kali Ars, Arsenic Alb, and Nux Vomica by understanding the causation, evolution, and expression of impatience. It enables the understanding of susceptibility that enabled selection of the LM potency, which finally restored the patient to health.

1st abortion: 3rd month of pregnancy because of growth defect

2nd abortion: 1st month of pregnancy because of tubal pregnancy

Sleep: Disturbed due to anxiety for her son, occ. due to dreams, complaints

The patient is born and brought up in Mumbai. She feared her father as he was a short-tempered man. Her mother, in contrast, was calm and quiet. The patient was pampered and attached to both parents. She is the eldest child with a younger sister and brother. Both her siblings are short-tempered. Since childhood, the patient has been very irritable and obstinate. She described an incident from her childhood to elaborate on her nature. One day, at lunch, she demanded to eat in a particular plate. She would not take no for an answer and kept arguing with her mother and sister. When her father slapped her, she stopped talking and left the room in a huff without eating. She was very angry with her father but did not express the anger. After some time, she calmed down and ate the food. She would often quarrel with her sister and would not talk to her for 1-2 days. This behaviour of the patient continues till today.

She was married at 19 years. Her husband is a government servant. The in-laws are good natured and well educated. In arguments with the husband, the patient usually gets her own way as she is more dominating. She constantly demands things like a washing machine or other home equipment. She pesters her husband until he gives in. She usually spends his money on household expenses; the money she earns is saved for the future. If she is not obeyed, she becomes irritable and angry.

She has been taking tuitions after marriage. The cough due to chalk dust has started since then.

Her child often falls ill. She worries about what will happen to him and whether the doctor will be able to cure him. She has gotten him examined by numerous doctors; she even consulted a native healer. The patient experiences constant anxiety about her son.

She has fear of being electrocuted when she touches a switch, also fearing hospitalization. She has a fear of the dark, which produces palpitations. If she hears about anyone being admitted to a hospital, she feels the same thing will happen to her and she then worries who will take care of her home.

This case needs Boenninghausen’s approach since there is a plethora of symptoms with a lot of modalities along with concomitants, physical generals, and a few qualified mentals. 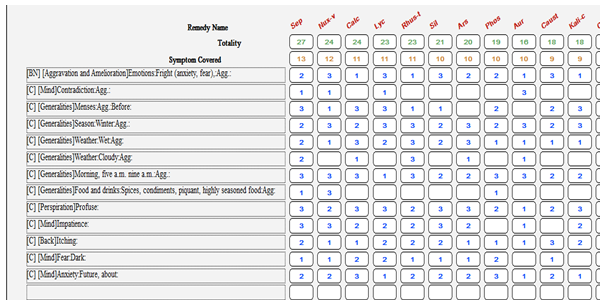 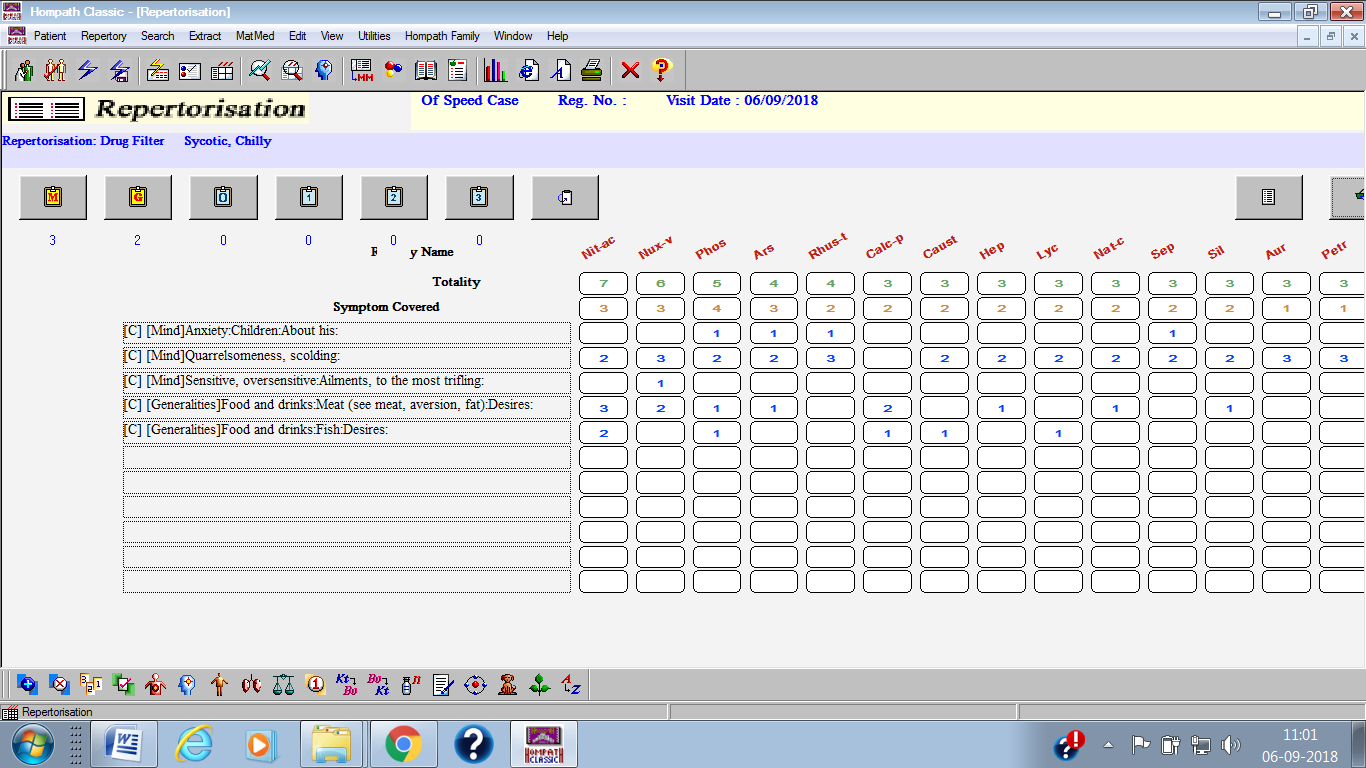 The predominant remedies are Sepia, Nux Vomica, Calcarea carb, Arsenic album, and Kali carb. The PDF of the repertorization helps narrow the remedies to Nux Vomica and Arsenic with a possibility of Kali Ars. All the above remedies cover irritability, impatience, and anxiety, with an affinity for the mucous membranes of the respiratory tract. This lady comes across as extremely impatient, as is evident through her intolerance/sensitivity to her suffering. Kali ars and Arsenic Album remedies are extremely anxious and their impatience arises from this anxiety. With Kali Ars, sentiments and attachment to the family are the primary focus. However, in this case, her attachment expresses only as anxiety for her son. The impatience of Arsenic album arises specifically from fear of death and anxiety for health, which makes them restless. In Nux Vomica, the impatience stems from intolerance to suffering; as stated by William Boericke: ”Very irritable; sensitive to all impressions, even least ailment affects her greatly”. S R. Pathak mentions ”Nux Vomica cannot stand pain, so mad that he cries in pain”. In this patient, the intolerance is also seen when denied anything or when contradicted, with great irritability and reactivity. Her relationship with her husband also reflects her impatience and domineering nature. Thus, in this case, oversensitivity and reactivity are seen at the mental and physical level, the impatience and intolerance pointing more towards Nux Vomica.

Follow-up management
The potency was gradually raised from 0/1 to 0/3. It was raised as and when recurrence of old symptoms was observed or any new symptom appeared. In a few follow-ups, BD dosage was used considering the regular use of inhalers. Retrospectively considering the susceptibility and sensitivity, it would have been better to step up the potency earlier. This was corrected in the subsequent follow-ups.

Experience narrated by the patient

I had a severe problem of Asthma and cough since the last 17 years. I suffered from breathlessness while walking and climbing stairs. I was not even able to do any exercise, not even yoga. Along with this I had sneezing while preparing food, while cleaning the house, followed by rattling in the chest and constant coughing. I used to require the inhaler daily, both in rainy and winter seasons.

I have started homoeopathic treatment at your hospital since the last 8 months, and after this treatment I feel much better now. The breathlessness has reduced considerably and I am even able to do Yoga. I don’t experience any trouble doing any household work of cooking and cleaning. Overall I feel relieved more than 80%. There have been no episodes of severe breathlessness in this rainy season which earlier was very common. Earlier I used to get impatient during the episodes of breathlessness and used to take inhaler immediately, that anxiety has also reduced now.

Learning from the case (the Primary Physician)

A retrospective analysis of the case enabled me to understand my mistake – without understanding case processing, I directly jumped into Repertorization. This case taught me the correct way of case processing and how to individualize the patient and the medicine at the core level.

This case opened a new way to understand the action of the LM potency and its utility in bronchial asthma.

I learnt about the personality of a Nux Vomica woman.